How Does Horse Communication With Humans Work?

Horse communicators, aka horse whisperers, have fascinated people for centuries.

These special people have a way with horses that has to be seen to be believed because the results can be incredible. The horses are drawn to them like flies to fresh baked pie!

They appear to communicate with each other in an unheard language, the language of the heart and mind.

How do the horses communicate with humans?

They whisper thoughts from heart to heart, mind to mind.

Telepathically, they share the energy of language and emotional expressions with each other.

In an intense client session, I whispered with two horses and several dachshund doggies.

Here’s what my clients, Miki and Steven, had to say afterward about their experience:

“My husband and I first met Val over two years ago.  I had worked with another animal communicator who spoke in too many non-specific terms to make me believe in the practice. But I decided to try again with someone that had more experience.  I found Val by surfing the net.

“We set up our first phone consultation because my husband’s horse, Rooster, had developed some unusual behavior.  Rooster has always been enthusiastic about going on the trail.  He is the kind of horse who can’t wait to get the bit in his mouth and the bridle on his head.  Suddenly, we couldn’t touch his ears or his pole and he wouldn’t take the bit.

Val was able to tell us that Rooster had either cast himself or gotten his head stuck in the horse next door’s paddock and smacked himself on the head.  She recommended a chiropractor and a masseuse.

We didn’t tell either the chiropractor or masseuse what Val had said, only that we wanted their evaluation.

We were amazed and excited when they both confirmed Val’s diagnoses!  Wow.

“Another issue for us was Rooster’s saddle not fitting properly (he was virtually wither-less at that time) and he had white burn marks on his coat because of the unevenness of the pressure from his saddle.

Val recommended we get the Saddle Right pad.  We bought one and his pressure point issues went away, and now he’s much more comfortable.

“Next, Val spoke to my horse, Benito, and told us to get him a dentist.  She said he had hooks in the back of his mouth and wasn’t able to eat properly.

The dentist came out and reported the very same – that Benito had hooks in the back of his mouth!

“Val moved on to the dogs and spoke with our rescue dachshund, Coco.  Miss Coco had been a brood bitch in a puppy mill.  We had had her for about two years at that time and she had undergone hernia surgery and had several teeth extracted.  She had had a hard life and was still suffering the after effects.  We were concerned because she seemed lethargic, bewildered and uncomfortable.

Val said that she sensed a problem in her gums and teeth.  Again, we said nothing to the vet and Miss Coco was found to have an abscess in her gums and needed more teeth pulled.

“I had never been given such a thorough “laundry list” of action items that were so accurate.

“Not all of Val’s work is diagnostic.  In fact some of the more entertaining work she did was with our most opinionated dachshund, Augie.  I had complained that he didn’t listen. 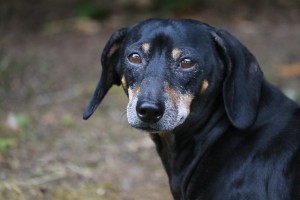 She related that he was rather “argumentative” when he spoke with her and that he said he didn’t know he was supposed to listen to me, that he was going to do his own thing no matter what – and that when we say “come” and he says, “Maybe – what’s in it for me?”

“We had to laugh because yes, that is exactly our Augie’s attitude!

“The very specific diagnoses that we have received from Val are what our relationship with her is based upon.

“We have had several other “aha” moments over the last two years with our now three horses and three dogs.  These experiences are the basis for our faith in her work.

“In our experience, NOT all animal communicators are created equally.  And, opening up a channel to our wonderful animal companions can be quite entertaining and fun as well as informative.” 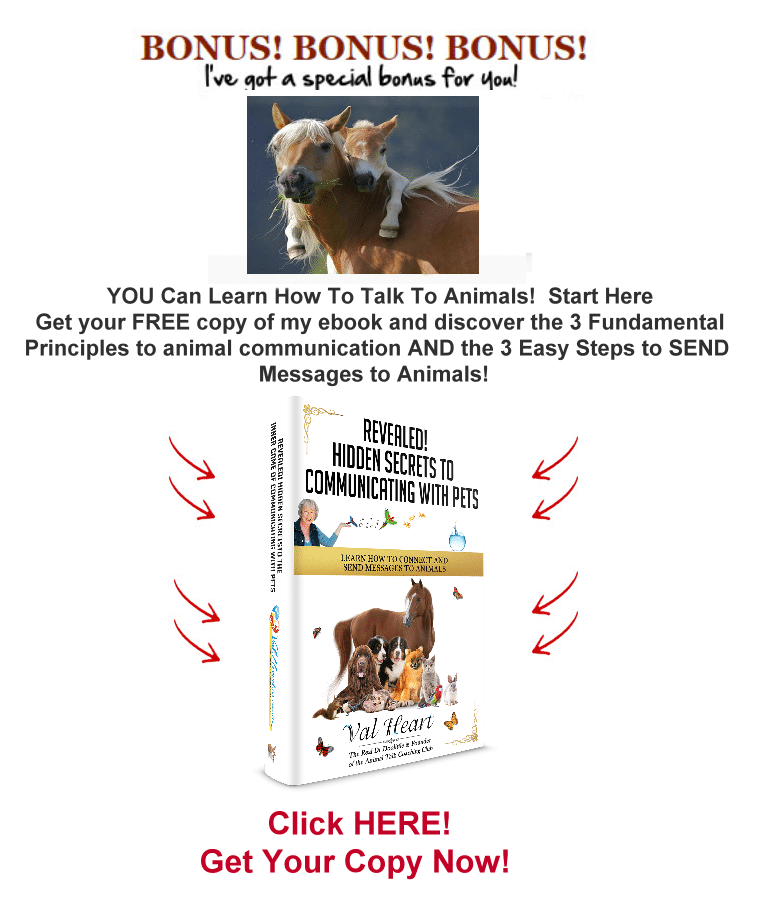 When I first met Miki and Steven, they were having some serious problems with their horses.  They’d tried so many different things, and weren’t having much success.  They consulted me out of desperation and as a last resort.

Benito and Miki weren’t getting along well at all.  He was resistant, stubborn and difficult to ride or work with.  He’d never bonded with her and was pretty depressed.  Their trainer just wanted to work him harder.  When I spoke with him, he shared how unhappy he was, he felt misunderstood, and hated his work because of the pain he was in.  He also had a mysterious lameness that no one could figure out or help.

What a difference!  Today he is a well-adjusted horse, very affectionate with his humans, and loves his work.  His lameness issues improved and he has become a trusted leader on the trails, working happily under saddle.

Rooster proved himself recently on the trail during a serious emergency with another horse and rider who had fallen off a cliff.  He’s also doing extremely well, and during our last session with him, he indicated that he’d be interested in learning about cows…

And I’m happy to tell you that Miss Coco is very happily integrated into her family, and although she is very old, she gets around remarkably well.